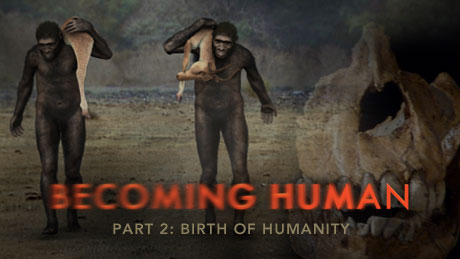 (Copyrights of the image above belongs to NOVA PBS)

Unearthing Our Journey to Humanity: Becoming Human, Second of a Three-Part Series, a Film Review

If the Part I of Nova PBS documentary film, Becoming Human had caused us the daunting reality of our ape origin, the Birth of Humanity was an inspiring one. For in this second part of the film, the journey of our ancestors to humanity was featured in such a meaningful way. As nearly one-and-a-half-million years ago, a very intelligent species called Homo erectus evolved, lived and left the “great rift valleys of Africa,” and begun colonizing different parts of the world.

In 1984, a fossil discovered by well-known African anthropologists Richard and Meave Leakey, Turkana Boy—was found to have a bigger brain, bigger jaws, and very much taller compared to any Homo habilis or Lucy and Selam (Australopithecus afarensis) who highlighted the Part I.

Named after the Lake Turkana of Kenya, the species of Turkana Boy—Homo erectus was branded as the pioneer in so many human traits and behaviors; and, was also tagged as the “fire tamer,” tool maker, innovator, the great “originator of human society,” fierce-hunter, and one of the most successful species in the Homo genus.

What was truly remarkable in Part II, was the chain of compelling stories told by scientists about human evolution that existed roughly 1,300,000 years ago by merely fossil discoveries alone. And it was through Turkana Boy and the completeness of his skeleton, that scientists learned thoroughly about the physique, height, and face structure of Homo erectus. In addition, his age and even the medical condition he suffered were likewise traced through the genetic dating process called molecular clock.

But one big difference of Turkana Boy to Lucy and Selam was his ability to run persistently.  Although the latter have pioneered bipedalism (walking upright on two feet), they weren’t capable of long distance running at all. This was because, through the nearly hairless bodies (having the ability to sweat and diffuse heat) of Homo erectus, that they became so agile and adept to persistent hunting.

On a lighter note, scientists believed Homo erectus can cook too. And though primitive, that cooking led to the transformation and development of their physical features. It made them sociable as well.

Experts likewise attributed their success, to their apparent exodus to Africa. Labeled as great travelers and colonizers, they started building the human societies in Indonesia and China.

To end, the Part Two of Becoming Human was indeed very inspiring. For through fossil discoveries, and the painstaking works of scientists, and amid earth’s primitive age—it was clear, that our ancestors evolved and survived the wilds, and found their road to humanity by exhibiting the simplest, yet  greatest and most humane behaviors. For it is during the Prehistoric time of Homo erectus, our ancestors started caring for one another. It was then, that they started to think analytically and creatively.  As they made enhanced tools out of stones, to outwit animals, and to feed themselves and take care of one another.  Therefore, it wasn’t just about physical differences that truly set distinctions between earlier species and Homo erectus. Rather, it was during the Prehistoric existence of the latter, that our ancestors earned the universal legacy of exhibiting emotional, analytical, and social characteristics. For those humane behaviors have ultimately led Homo erectus to the path of humanity–and this is something we should always keep in mind. For those traits, even on these very modern days, should be inherent to all of us. For those traits set us apart and above everyone and everything in the animal kingdom–we should really be mindful of  them all the time.

What’s in the News: